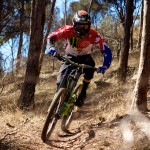 Liam Renaut has been a busy boy over the past 6 months. As well as filming the entire 2011/12 National series over summer, he’s also spent time catching up with some of Australia’s fastest guns in the downhill scene today. Including two times Junior World Champion Troy Brosnan, current World Cup Series female leader Tracey Hannah riding for their new Hutchinson United Ride Team, plus Joey Vejvoda and Andrew Crimmins.

Below: Liam lines up the next shot while Troy, as usual, waiting to walk back up, gets a few breaths in. Although he is only 18 he’s pretty much a veteran of this routine now.

I was lucky enough to film with Liam for  Troy’s section on a local trail. Liam had his ideas sussed and it was cool to work with a young keen young filmmaker like him. I’m sure you’ll agree, he has the editing dialed in and as much as his filming.

During the shoot, since my video shots were setup and locked off on the tripod, I managed to take a few stills of Troy pinning it in his new kit, complete with the Aussie flag down one side, made after he took the title for Australian National Champion at Eagle Park in February. Best of luck to Troy during the world cup series this year.

Trackback from your site.