Earlier in the year I headed out with Troy to get some shots and go for a ride.
We started off first thing for road ride down the esplanade.
After that he got the freshly stickered Moto out and after a quick Subway sandwich we headed out to Gillman

Clay Porter has been making some of the best downhill MTB films to date. This short edit delving into the minds of the Team Monster Energy Specialized riders, Sam Hill (3x World Champion) and team mate Troy Brosnan (2x and current Junior World Champion), is no exception. Enjoy!!! 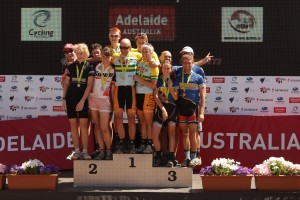 Today was officially day 2 of the 2012 Australian National MTB Championships held at Eagle Park MTB Park in the Adelaide Hills, just a 20 minute drive from the CBD. Although it has started to really heat up, and more of the same is expected for the rest of the week, there were still a lot of competitors arriving through out the day. The first official event at this year’s Championships kicked off this afternoon with the Cross Country Team Relay. Throughout the race there were some tough battles. But after the 4 laps were done it was Team Torq Nutrition, consisting of Billy Sewell, Katherine O’Shea, Jack Haig and Mark Fenner, who took the win by just over 2 and a half minutes from Canberra Off Road Cyclists in 2nd and Perth MTB Club Team. Unfortunately the local team, Adelaide MTB Club, had to settle for 4th after James Hanus had a rear mech catastrophe resulting in him having to run part of the way in the final lap.

The DH course was open and it was really getting a battering from the bus loads of eager downhill riders during the practise session. Some DH riders to keep an eye out for were Jared Graves, Ben Cory, Sam Hill and Troy Brosnan. We caught up with Troy (pictured with his Specialized Demo) to see what he thought about the conditions.

View the vid below to see some highlights from the day.